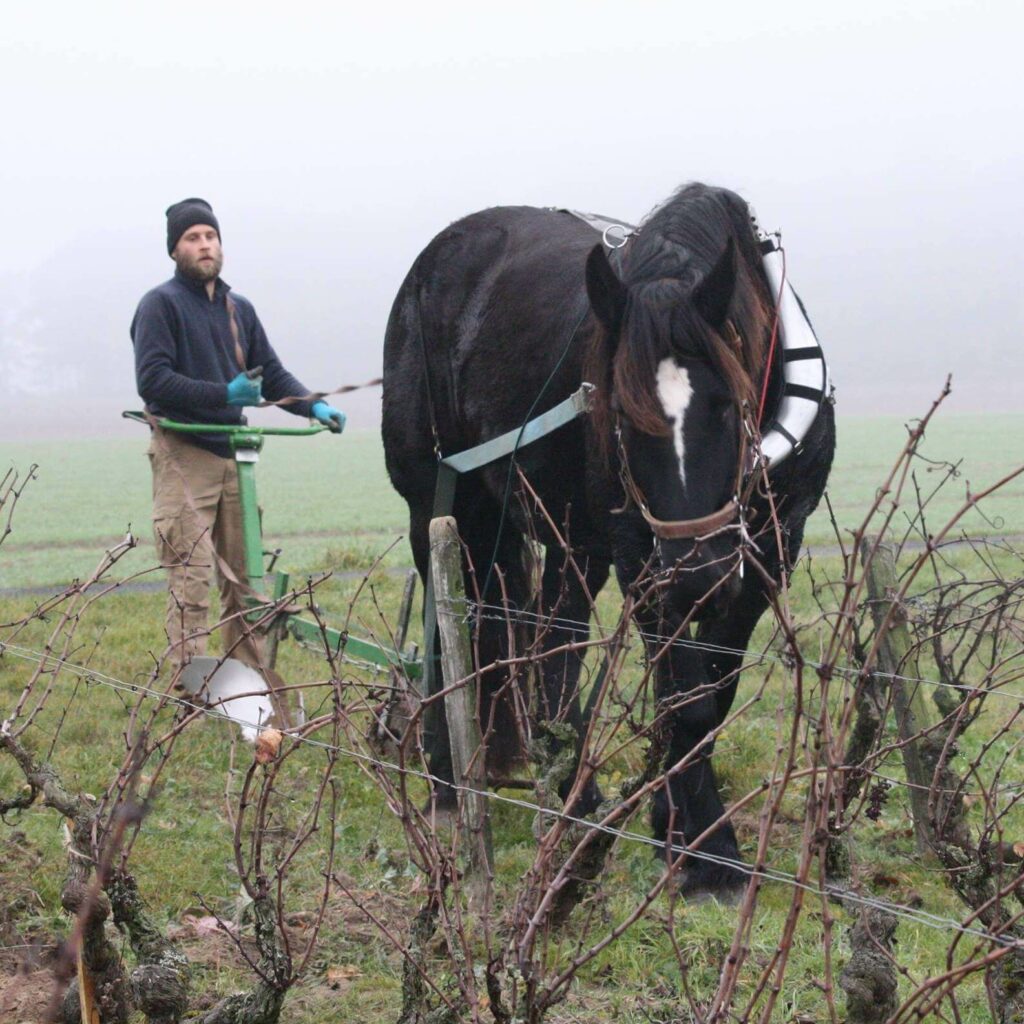 We met Alexandre through Michel Autran back in 2019, a neighbour of his in Noizay, on the northern bank of the Loire, right in between the town of Vouvray and Amboise. They shared harvest teams and we were looking to source new young winemakers who would share the same philosophy as Michel Autran, who we regard as one of the top producers in Vouvray.

Alexandre works from two cellars. Both are next to each other and dug in the white “troglodyte” hardened clay that constitutes the bedrock of the hills above the Loire river. In France, a winemaker that wants to purchase grapes and vinify them must do so in a separate location from where he works the grapes of his own production. Alexandre got lucky and found two cellars side-by-side.

We like to note that this requirement is outdated: young winemakers often need to purchase grapes to subsidise their income and investment into viticultural land, yet they are forced to create a separate commercial entity and rent a separate space. This adds administrative work and runs at higher costs. The price of the hectare of planted vines keeps climbing while the average yields are going down. Thanks in part to more thorough bio and bio-dynamic principles, but also due to frost, hail and mildew.

Alexandre produces AOC Vouvray from a few Chenin Blanc parcels as well as Gamay from an old parcel of selection massale near Limeray. He started purchasing parcels in 2018 and now holds about 3 hectares. He works biodynamically in the vines, although he doesn’t seek certification and works his land with the help of a horse. The vinification is straightforward: press using an old vaselin, fermentation in neutral tanks with a preference for fibreglass. Malolactic on whites is usually slower and he prefers this to happen on old barrels. All the wines from his own vines are barrel-aged, while he keeps experimenting with his négoce grapes. Although he strives to avoid sulfur, he does add some at the cuvaison. He only makes wines for about 4 years and wants to discover the right groove for his own vines. His caves are particularly cold and while the barrels ferment slowly in the deep end, he makes use of makeshift temperature control using heated blankets that he straps to his vats. He laughs about their cost and efficiency versus the modern electronically controlled and expensive stainless vats.

We visited Alexandre after lunch with Michel Autran who lives up the road next to Noizay’s castle. He showed us around both caves but we, unfortunately, had no time to visit the vineyard. It was nearing the solstice and the darkness fell on us in about fifteen minutes just after five. We tasted the wines on barrels and vats, 2020 rounding themselves up and all 2021s.

Alexandre’s Vouvray is of a different expression than Michel Autran’s, the latter having chosen to declassify his wines to Vin de France since 2017. Giquel’s wines are slightly off-dry as he keeps a little noble rot during harvest. In vintages like 2019, they are balanced with fantastic acidity. They have bright tones of beeswax and honey -typical of the region’s old school Chenin – with almost underripe apricot fruit. In warmer years like 2020 they deserve a little more age, the lower acidity needs more time to integrate and release more complex aromas. They are great paired with cheeses but also with sushi as its roundness supplements delicate umami. H release a single cuvée of Vouvray in 2020 but we tasted barrels from two parcels for 2021: “Moncontour” and “Basse-Quarts”. They were both in full fermentation, bubbly and yeasty. Difficult to distinguish but a slightly higher acidity in the ‘Moncontour”.

His old parcel of Gamay is called “Maluseaux”. Alexandre is proud of this parcel as it allows him to make a serious wine. The age of the vines gives him a chance to vinify with semi-carbonic and find a balance between fruit and tannins. He allows for some extraction and the wines are usually quite dark but they do not feel weighted especially in 2020. They bring forward earthy tones and darker fruit. The wines have so far been quite low in volatile acidity so they are rustic but not wild. The 2021’s we tasted were not finished but showed great concentration.

Through his négoce work, Alexandre explores different varietals from the Loire. Some very local like Cabernet Franc, and some from a bit further upstream like Grolleau, or downstream like Melon de Bourgogne. He makes fruit-driven reds to be drunk young but also experiments.

One of his greatest experiments is his pétillant-naturels, aged for up to three years on its lees. In our eyes they are akin to the great sparkling of Michel Autran -also made using the pétillant naturel method – and show the true potential of bubbles and Chenin Blanc. Powerful with no dosage, they are miles apart from the insipid and cheap vin mousseux that Vouvray is unfortunately known for. Alexandre also makes another pétillant from Gamay grapes, concentrated and without residual sugar. On vat, we even tasted a macerated Chenin, which we were very keen for. He kept the skin-contact for up to a week and the wine had a great structure.