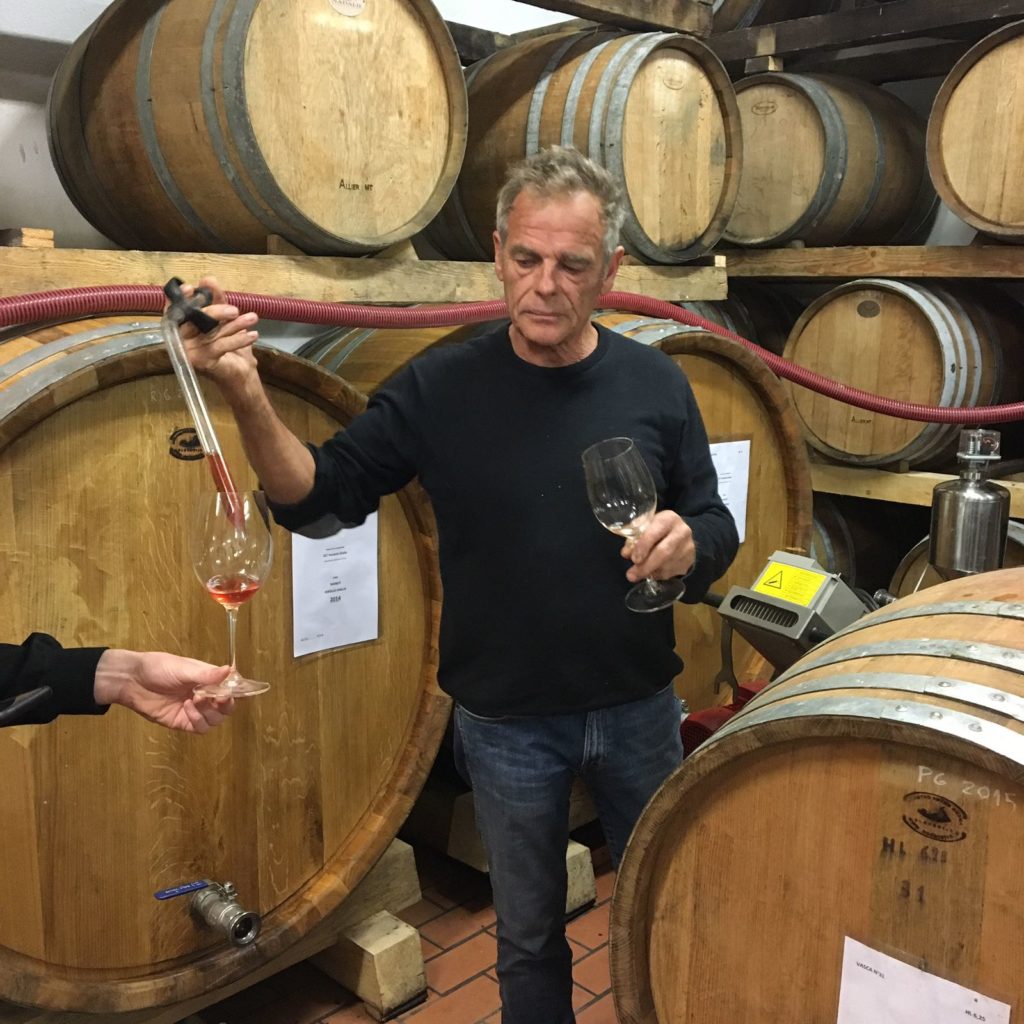 The winery and home of Dario Prinčič is located on the hills above the city of Gorizia, only one kilometer west of the slovenian border. The zone was one of the last frontlines of the 1st World War when the Italian Republic attacked the Austrian-Hungarian Empire. The Prinčič’s town was completely destroyed and rebuilt 300m higher. This while most of the land remained abandoned until the end of the 2nd World War. Already crippled by the phylloxera, the wines of Friuli only made a comeback with the popularity of Pinot Grigio in the 80’s and 90’s. Before, the wine was sold in bulk and always blended. The grape first was introduced under Habsburg reign amongst other French varietals.

Dario has not used chemicals in his vineyard since 1988 and adopted a non-interventionist approach to winemaking. Alike fellow producers Josko Gravner or Stanko Radikon, the skins of the white varietals are left to macerate resulting in “Orange” wines. This allows the exploration of other aromatic palettes, here most seductive and revealing in the local Ribolla Gialla, a grape high in acidity. While some would call it a discovery, Slovenians and Italians don’t even call it orange. Prinčič tells about to the winemaking of his grandparents who deliberately sought out tannin against oxidation and as preservative.

His winery is located within a hillside under his home. The grapes coming from surrounding parcels are macerated in wooden vats, pressed, transferred in barrels and finally decanted in stainless steel. Dario owns Slovenian vats and barrels but he also sourced oak, acacia and rover from a nearby forest. While the skin maceration helps against oxidation, Princic does not like the word as it is commonly used, often meaning the death of a wine. Oxidation as a fault is due to bad quality of grapes, the example of a ​vin de voile​ he tells, is a wine that lives with air but not against it. The barrels are only topped up once or twice a year, equivalent to a loss of 5-6 liters over the whole process.

Prinčič farms plots of Tocai Friulano, Ribolla Gialla, Chardonnay, Sauvignon, Pinot Grigio, Merlot and Cabernet Sauvignon.​ ​He produces a simple ​Rosso​ and ​Bianco ​(4 days on the skins) from Merlot and Chardonnay/Sauvignon released after a minimum of 2 years and allows a longer maturation for his other cuvées. His Pinot Grigio stays for 8 days on the skins to avoid extraction of too bitter flavours. The Ribolla Gialla and ​Jakot​ (Tocai Friulano) stay between 20 to 25 days, with a further aging of 3 years on barrel at the minimum. There is only one blend: ​Bianco Trebez ​with Chardonnay, Sauvignon and Pinot Grigio, all macerated for 30 days, and blended after fermentation. Dario’s only blend until 2012 was his quite lyrical Favola​ cuvée of 2008. Here he lost 90% of his grapes due to a mould but refused to spray any fungicide, aging the small amount of juice he had in barrels that he did not top up. The resulting wine inspired his more recent ​Selezione​ wines, where he experiments with oxidation in a few select barrels. He recently released both oxidative and non-oxidative Trebez​ blends in 2012 and ​Pinot Grigio i​n 2013.