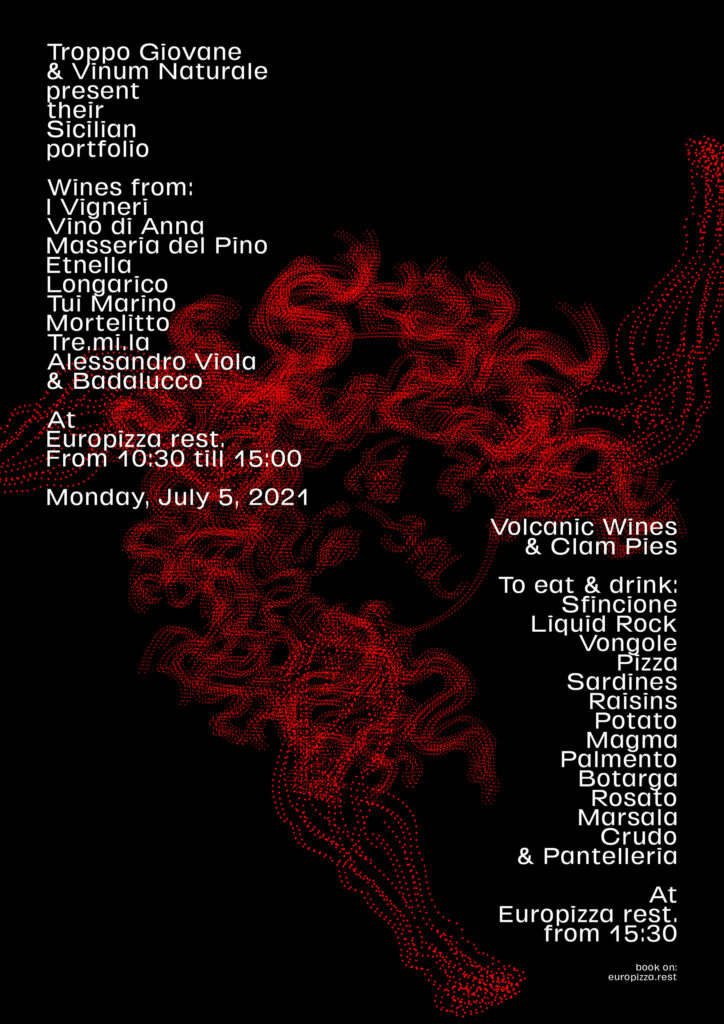 I Vigneri, Mount Etna
I Vigneri is a collective of vinegrowers and winemakers on Mount Etna and Eastern Sicily under the guidance of Salvo Foti. Salvo is a legend in both local expertise of soil and terroirs and traditional winemaking, having revived the almost forgotten Palmento way of making wine. Here’s a link to a great video showing the almost ritualistic and celebratory making of this particular wine: the grapes are foot trodden and their juice flows into a tank dug into the lava stone. The stems and skins are then pressed tightly using an old-school wooden screw-press to add the fresh and green tannins making the wine so typical.

Vino di Anna, Mount Etna
Anna Martens and Eric Narioo bought their first vineyard on Mount Etna back in 2010. They make wine in an old Palmento but also in several Georgian Qvevri. From their 6 hectares of terraced vineyards on the north-facing slope of the volcano, they make wine at an altitude between 600 and an incredible 1200 meters! These are new wines from old friends as Théo started his wine career working in one of Eric’s restaurants in London back in 2010.

Masseria del Pino, Mount Etna
Also located on the northern slope of the Etna, Cesare and Federica own pre-phylloxera vines, of an incredible 120 to 140 years old. All winemaking is done by means of old practices, using the estate’s ancient Palmento, lava stone fermentation vats and press. You’ll find their Caravan Petrol, one of the best macerated wines of the island (if not of Italy), their rosé SuperLuna, a fantastic example of the minerality a direct-pressing of red grapes can produce, and their I Nove Fratelli, a rustic yet energetic red.

Salvatore Marino, Syracuse
Turi is one of the islands’ most interesting oenologists, having ruled out modern winemaking techniques and their assorted chemicals very early in his career. He is now making wines under his own name near the southern baroque city of Syracuse since 2017. A return to a more democratic and simple way of winemaking that shows in his great Turi Bianco and Turi Rosso, light wines without pretension. A shorter maceration for the red brings a lively saltiness and a light maceration for the white brings vibrant citrus and nutty tones.

Monday the 5th of July
We have organised a tasting followed by an early to later dinner at Europizza Rest. on Monday the 5th. Come taste our wines from 10:30 till 15:00 and grab a bite from 15:30, we have also bulked out the wine list with some of our most special cellared Sicilian wines. The tasting is organised in collaboration with our great friends at Vinum Naturale who are also bringing amazing wines. To taste the Sicilian wines from Vinum Naturale and Troppo Giovane, stop by Europizza restaurant on Monday the 5th from 10.30 till 15.00! Book an early dinner on europizza.rest!

If you can not come to the tasting but are interested in the wines, please sign-up for our newsletter, more information will come and a special offer with mixed cases!